Home » Jackets Of Michael Jackson Throughout His Life 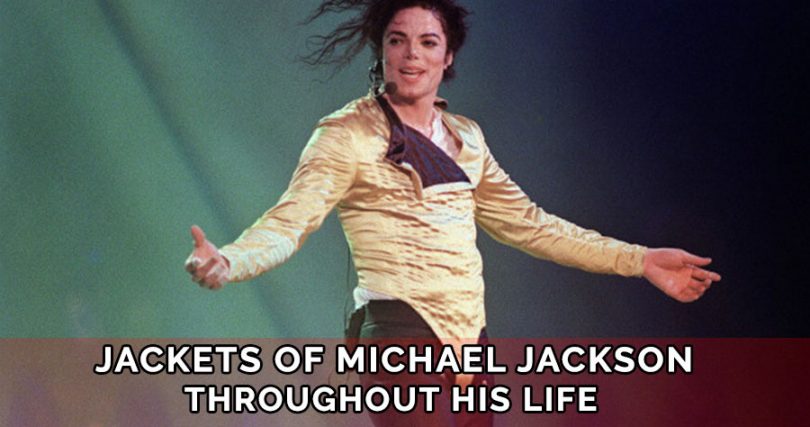 Being pop star is very simple; as you just have to keep two things in your mind. First, you should be smart enough in singing, dancing and writing lyrics. Second, how good and creatively you present it. There are a lot of singers, musicians, and actors since 80’s and 90’s who just wanted to entrance their fans with their amazing performance, but having said that all, no one can beat the talent and persona of great Michael Jackson in the music industry. He has received every major award and become successful because he was a musical and entertainment genius. He was also a celebrity that people get inspiration from him, as well as a motivation for all minorities and broke down many harmful walls. There is a lot of things which we can discuss about this famous personality, but today, we will just gather his popular outfits that everyone loves to wear to the parties. You might be not aware of all the jackets, so take ideas from here.

has worn this jacket in his Bad Tour Concert opening act. His song was all about being badass. It was a first solo concert tour of Jackson from September 12, 1987 till January 24, 1987. And the album “Bad” was launched in 1987.

Leave me Alone is a song by American Artist Michael Jackson and it is taken from the album bad. This fascinating jacket is worn by Jackson by singing a song. It was released on 1987 and gets several awards for this song. The song was written and composed by Jackson and produced by Quincy Jones.

This red jacket is taken from the song Beat it that is written and performed by American artist “Beat It”. It is inspired from the MJ sixth solo album Thriller (1982). Michael Jackson’s “Beat It” has been mentioned as one of the most successful, recognized, awarded and celebrated songs in the history of pop music.

Bad is a song by Michael Jackson that was released by Epic Records in 1987. Jackson stated that the song was influenced by a real-life story he had read, of a young man who struggled to run off deficiency by attending private school but ended up person killed when he returned home. This fascinating jacket was worn by him during his concert.

Teaser Military Jacket is the glorious creation inspired by the respected singer Michel Jackson who always presents music in different style, history tour is one of his remarkable trip in which he wore this wonderful jacket while performing the song Everyday creates the History.

Thriller is the last and final song released by Epic Records from his 1982 studio album Thriller. “Thriller” has emerged on numerous supreme hits collection albums from Jackson, including History (1995), Number Ones (2003), and The Essential Michael Jackson (2005). It has received positive reviews from critics become a seventh top composition.

Michael Jackson varsity jacket is also taken from the popular album Thriller. It is a remarkable piece that he has worn while performing the song. Michael Jackson created a lot of buzzes, and the song was an immediate hit. People are still the great fan of his songs and album.

This incredible jacket is inspired by the song Heal the World and Michael Jackson wore this jacket during the concert. It is taken from the MJ eighth studio album Dangerous (1991). The song was played at the funeral of James Bulger, and Jackson also donated the song to be used as the song of praise for the charity the James Bulger Red Balloon Centre.

This stylish jacket is worn by the super star Michael Jackson at the time of Hollywood Walk of Fame. The category of Michael Jackson was Radio and recording. It is one of his amazing jacket that looks stunning on him.

The jacket is inspired by the Victory Tour that is worn by Michael Jackson. Basically, it was a concert tour of the United States and Canada between July and December 1984. It was the only tour with six Jackson’s brothers. It set a new record for the highest grossing tour. His jacket also becomes popular at that time.

Billie Jean is a song by Michael Jackson that is released in January 1983. The Billie Jean jacket is worn by Jackson during his concert. The song is about woman Billie Jean who has spent night passion with the narrator. Jackson stated the song that the song was based on girls who had made the same assert about his older brothers when he toured with them as the part of The Jackson 5.

This jacket is worn by Michael Jackson on the 11th Annual American Music Award that was held on January 16, 1984. Michael Jackson was the big winner of this night by winning eight awards of pop/rock. From the various nominations, he gets a lot of awards because of his classical music.

The white inspirational jacket is inspired by the Michael Jackson that he worn on the 35th Grammy Awards held on February 24, 1993. It is also an impressive jacket that is loved by many people. Craftsman made many replicas of this jacket, but the original seems always amazing.

The Black military jacket is worn by Michael Jackson during the bad era. It is also one of the inspiring jackets that everyone loved it. An amazing military jacket with the fascinating embroidered that seems also remarkable.

MTV award is known to be VMA (Video Music Award) that is presented by cable channel MTV to honor the best in the music video medium. This appealing jacket was worn by Michael Jackson while attending MTV awards. It is the one that attracts the audience immediately.

The dangerous world tour was the second solo concert of Michael Jackson and the tour was sponsored by Pepsi-cola included 70 performance. This jacket was worn by Michael Jackson while presenting the song Jam. The song is the fourth single from his 1991 album Dangerous.

The live in Bucharest: The Dangerous Tour is a live concert DVD by American recording artist Michael Jackson released on July 2005. Michael Jackson wore this Bucharest Military Jacket during his concert and fascinates many of the viewers.

The 1989 Soul Train Music Awards was held at the Shrine Auditorium in Los Angeles and awards were given on the basis of best R&B, soul, rap, jazz, gospel music of the previous years. Michael Jackson received the many awards like for career achievements and also entertainer of the year. He wore this jacket on that event.

The Military jacket that is mentioned is inspired by the Michael Jackson who wore this jacket during his Bahrain visit in 2005. The style of the apparel of MJ always looks unique and attractive that always seems amazing to wear. He always wears the attire that attracts the spectaculars.

Michael Jackson Will You Be There Jacket

The jacket that is available here is inspired by the most popular artist Michael Jackson. He wore this jacket during his concert while singing the song “Will You Be There”. The song was the biggest hits from the Dangerous staying on the top 40 for over six weeks in the UK.

The Balmain style jacket is available here that seems impressive and Michael Jackson wore it for a charming appearance. He wore it at the Balmain show that was an Ode to Jackson and his iconic moonwalk shoes.

The Michael Jackson Mickey Mouse jacket is worn by Jackson to just attract the viewers. It is one of the inspirational attire that amazes many of the followers at that time. Michael Jackson’s attire always seems inspiring that fascinates others.

Michael Jackson was master of music and dance and won various awards on his capabilities. Many people knew bits about his life; no one person really had an idea of the big picture. His story always shows different parts of his life and career. Here we have gathered various jackets for his songs that get famous and now everyone is purchasing it to look like a popular Jackson.