Home » PUBG Updates: All PUBG updates from season 1 to season 11 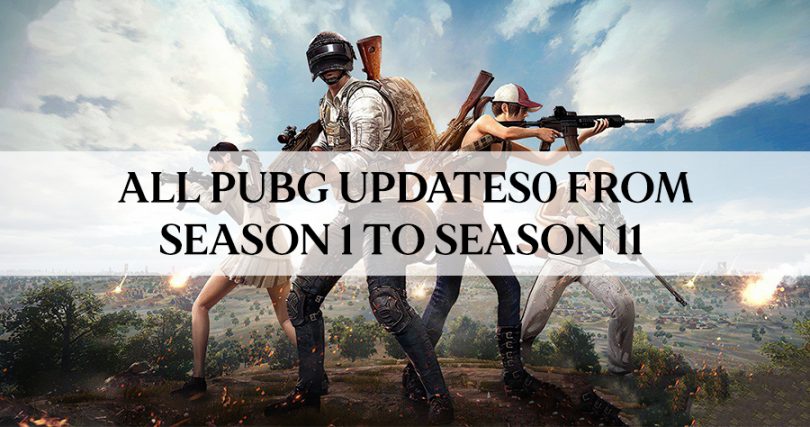 PUBG is definitely one of the most favorite online multiplayer battle royale game for today’s generation. The game was initially introduced in March 2017. If you are a gamer, then you must have been addicted to this battle royale game, as it allows you to work on your reflexes, targets and strategy planning.

The plot of the game starts with summing up one hundred players in around. The players can land on any location of the island, it is preferred to land where you see clusters of building. The players are required to collect weapons, ammunition and equipment that could be used to kill the opponents and save themselves. The map gets tighter after spans of time. Players must remain in the safe zone and get to their hiding places as the map gets tighter. The last one surviving wins the round and gets the Chicken Dinner. PUBG is surely a game that you would love to play with your gang. Invite your friends and family to form a team of two or four and get started with the fun.

PUBG was initially introduced in March 2017, with the most basic interface and features. As it’s 2020, the game has obviously evolved in terms of design, storyline, scopes, weapons, language and limitations in mobility. In this article, we will be discussing the updates that PUBG has been through from Season 1 to Season 11. Every update has been significant, which improves the entire plot of the game for the players. The journey of PUBG has been intense and competitive. Each update has advantages and maybe some drawbacks as well. Let’s go through the following and check out the updates that every season came along with:

The first season of PUBG was surely the beginning of this incredible game, which came out to be quite a hit. the two most visible changes that this update made in the game, were the new Royale Pass system that earns players rewards and first-person perspective mode.

Along with these two main changes, the update included weapon and air-plane finishes, option to view the weapons in the armory, post-match results on the screen, added room cards, new items in the shop, tier protection system, the option to mute individual teammates, gift items, Asian character models, connectivity to two social networks, UI of pistols, a smaller map with more resources and air-drop and the ability of melee weapons to destroy tires.

The second release of update in Season 2 included two new in-game currencies known as Chicken Medal and Silver Bullet. The 4v4 mode where two four-member squads could battle for glory has been a classic addition to the game with the release of second season.

This update ensured to fix the bugs in weapons, audio, vehicles and matchmaking. This was one of the biggest updates of the PUBG game which ran for more than two weeks.

With the release of Season 3 the game was expected to take a huge turn. With this update the game assured to run on Android and iOS. The update didn’t include much changes in the Season 3, whereas the offer of earning cosmetic items for a price was maybe the only thing that could be labelled as something new in the release.

Season 4 has brought some noticeable changes in the game. The changes include an updated map, weapons, vehicle rebalancing and a great change in the healing items.

The new version of Erangel is surely the biggest change to list down here. The layout of the entire map has been updated with several popular spots such as Prison, Military Base, Mylta Power and Mansion. The hills that were previously a hazard in the game, have been turned into open plains, rocks and trees are moved in different places and many small placed have been located on the map.

The game’s weapon balance is another change in the game. There will be a noticeably less damage seen from weapons such as M4 and M16. The players can be heeled while walking, but if they jump or sprint the action will be canceled.

The vehicle balancing changes are quite obvious. Greatly improved handling of RWD vehicles and increased Buggy vehicles will be witnessed.

Heeling improvements are appreciated, where you can heal yourself while walking. Bandages can be used unless the player is completely healed. First aid kits can no longer heal additional damage after the healing starts.

The update of Season 5 has refreshed the battle field by making some amendments in the desert map, Miramar, with racetracks, loops, ramps and jumpboards. The players can opt for new challenges in the map. You can improve the look of the Battle field with new thematic Badlands skins. Lastly, the new throwing features allows the players to toss the weapons and support items towards each other.

The update that came along with the new Season of PUBG, made a huge improvement on its server. Another great achievement that the season introduced was the black zone, Karakin map and plenty more.

The location of Karakin is small but it is considered as a location for tactical urban conflict, claustrophobic underground combat and long-distance rifle engagements. Every match the layout of Karakin changes.

The mode of firing has been improved. The modes single, burst and auto are introduced depending on the weapon.

Map selection has been made vast: AS, KR/JP, RU, SEA and EU can be chosen.

The PUBG ID of each player will be shown at the end of the round.

The sounds of gun handling have been improved.

The UI bugs, sound bugs, skin and item bugs, custom match bugs and gameplay bugs are fixed in this iteration.

The update of Season 7 brings along the Royale Pass of the season. To the weekly mission challenge a friendly bonus will be added by this update that could make the players earn more RP points when they are completing missions with friends.

The Skorpion firearm will also be added to the game which will tout to spawn on all maps in the classic mode of the PUBG game. The darkest night mode will a new addition to the interface. A trail effect added while players land with their parachute, will help to make a trail of smoke.

The door bug was fixed with the update of Season 7.

As every new season comes along with new outfits, themes and skins, so did Season 8. The update of Season 8 introduced a unique and new theme to the game. The blue oceanic theme called ‘Power of The Ocean’ or ‘Ocean Treasure’ was loved by the players.

Additionally, new skins and outfits have been introduced with this release. The price tags for Royal Pass 8 will be almost the same as before.

The three new Avatars and Avatar Frames will be the highlight of this update.

The new blaster skin for SCAR-L will make it fun to use this weapon for the entire round.

The new addition of The Bizon Gun will be something astounding for the players of PUBG. The large capacity of the gun named as ‘Helical Magazine’ will be attached under the barrel and give you a firm vertical grip.

The Season 9 will surely leave the player breathless, as the game will be introducing some heavy weaponry. This update will also bring the warrior theme to the game. The costumes, ammunition and other items will be set according to the warrior-based theme.

As a player of PUBG game, you will be able to witness redesigned missions and ranking pages along with a countdown timer to the new season. You can now dismantle Emotes as well.

Under the Arcade section, you will be able to see a new gameplay mode. This gameplay mode will allow the players to fight with rocket launchers and helicopters.

The new update of Season 10 has rolled into the game with the new map, weapons, rewards, and vehicles. The natural surroundings of the map will enthuse the audience to play the game.

The Season has introduced a bunch of new missions, rewards, and challenges. The new weapons and vehicles will make the game more exciting than before. MP5K will now have a rate of 900 RPM at the fire.

With the new vehicle Zima, players will be able to drive across the snow and be resistant to damage.

Team recruitment channels have been improved.

The clan status details are now added with the release.

The in-game optimizations can now be done.

With the new Season 11, you will be astonished to see such new weapons and vehicles in the game. As the new season comes along, the players will be experiencing new vehicle skins, parachutes, emotes and rewards as well. New skin for M416, M762, pan, helmet, and backpack will be added to the game.

The new map ‘Town’ has been added with this release to the game.

A mini new SUV called Zima with a new snow bike will be seen in the game, that moves along at 115 km/h.

If you are a gaming freak then we are sure that PUBG must have been your favorite. The game has astounding features and specifications that an actual gamer would surely appreciate and adore. With every update, the game has managed to form an appreciative persona. From Season 1 to Season 11, the storyline, plot, characters, weapons and strategies have circulated with maturity. The development of PUBG has certainly made the game better at what it serves. We assume that the above updates from Season 1 to Season 11 have helped you in understanding the evolution of PUBG – online battle royale game.