Home » What Do You think Sex Education S01 Is Better than S02? Reviews 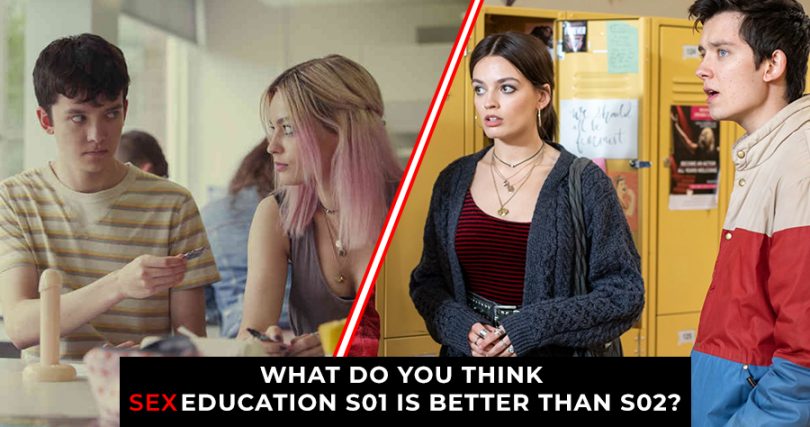 Sex Education – the teen comedy-drama TV series by Netflix has been popular among our generation. Season 01 was premiered on the 11th of January, 2019. Asa Butterfield, Gillian Anderson Ncuti Gatwa, Connor Swindells, Kedar Williams-Stirling and Emma Mackey are the stars of the show. Well, here’s the good news for all the fans of Sex Education – SEASON 02 is about to make an entry! Season 02 of Sex Education is scheduled to be premiered on the 17th of January, 2020.

The plot of Sex Education Season 01

The TV series of Netflix, Sex Education has been plotted around the awkwardness of Otis Milburn, a teenage schoolboy, who finds himself uncomfortable in sexual situations. Though his mother is a sex therapist and clearly frank about sex and all its aspects, Otis feels shy and uncomfortable to be caught up in such conversations. However, Otis starts up a sex advice business along with her classmate, who is quite confident and bold, Maeve Wiley. They both start to bond up quite well while giving sexual advice to their fellow students through their clinic.

The plot of Sex Education Season 02

The Second Season will continue the plot ahead with the relationship of Otis with Ola, who developed feelings for Otis as well. This is where Otis begins to experience reality and pressures of having a high school relationship. The heartbreaking news that Season 02 broke over the audience, was the secret love that Maeve held in her heart for Otis. As one day, she came to confess her feelings to Otis, she finds him kissing Ola, which breaks her heart and makes her keep this in her heart. Season 02 has introduced new characters, who are struggling in Moordale High School with topical issues.

Well, to be honest, I think that Season 02 is better than Season 02. You would be thinking why am I even leaning towards the Season that hasn’t made its premiere yet. Well, let me justify my opinion:

1. A twisted plot of love

As season 01 of Sex Education, ended up with the heartbreaking love twist, when Maeve came over to confess her feelings to Otis but saw Otis kissing Ola, we can expect to see these two love birds get together by the end of Season 02. As Ola and Otis’s relationship is quite hard to be justified among her parents, there may be a time when Otis would realize that Maeve is the only one for him. We all know that Otis felt some spark for Maeve in Season 01, but because of the fear of ruining his friendship, he stayed quiet.

2. New Characters will embrace a storyline

Season 02 is back with a hit and several new faces. Viv, a super-intelligent girl who lacks the talent when it comes to love is surely one of a character that you would love to see on the screen. Additionally, Rahim played by Sami Outalbali, the French student who has joined Moordale recently is about to turn up some heads. Isaac, the character who has quite a girl crush, will be making the moves into Maeve’s caravan park.

3. Maeve will be having a new bestie

As Maeve has been heartbroken because of the relationship that Otis and Ola have been indulged into, she obviously needed someone to count upon. The bond that Maeve will be having with Aimee in Season 02, will be the highlight of friendship. The BFF relationship between Aimee and Maeve will be something that people will admire on the screen.

4. Lily will be giving up on sex

As Season 01 of Sex Education has been fun because of Lily, the high school student who wanted to lose her virginity desperately but eventually fails. In Season 02, she will be putting sex off the table. As imaginative and a gifted artist she is, she will now focus on creative endeavors instead of running to lose her virginity. Lily’s fans love her.

Sex Education, is one of the most demanded TV series among teenagers, as it represents the awkwardness that this generation goes through in discussing sexual aspects with the parents and society. Season 01 has been a hit with a rating of 8.3. Season 02, which will be premiered on 17th of January 2020, will surely embark on a change in the society. To all the fans who have been waiting or Season 02 of Sex Education, get ready to please yourself with an even better plot than the previous Season.