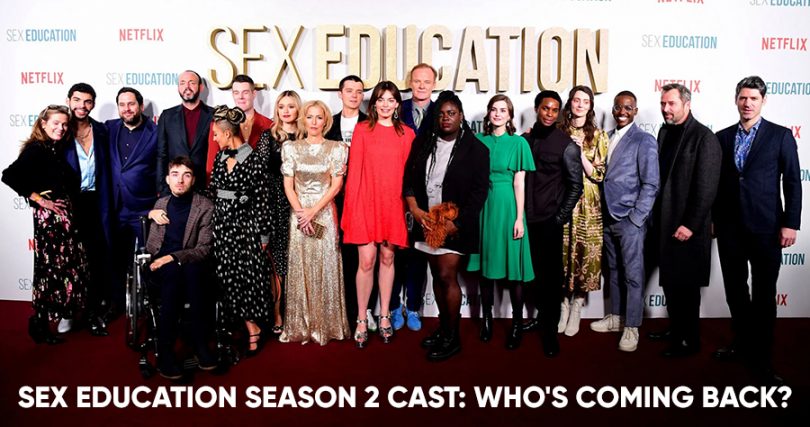 Season 2 of Sex Education is something we have been excited about for almost a year now. Well, basically from the time we all watched the first season and got curious about what will happen next if something happens! Thankfully, because of the surprising yet deserving response that the team got in just the first week of the release, they officially announced the second season in a month of the initial release only. While we didn’t have the anxiety of thinking about what if there won’t be a season 2, we still had to wait for a long time and that too with patience because we love the cast. There were a number of questions that still needed answers like what will be the main plot, what will happen to Otis and Maeve, and all the other characters, but most importantly, who’s coming back?

Now that we have enough material on the information regarding the upcoming season, we have combined a list of who’s coming back for season 2 and in what capacity so that you can see if your favorite character will be there and if their role has a major change or not! So without further ado, let’s dive straight into the list of all characters of this amazing cast:

Well, how can we even think that season two would be there without our cute Otis? However, there is a major change in his character and so even if the role is being done by the same actor, one can say that we will see a new Otis this time. The rationale behind saying this is how the character has been portrayed in the show. In the first season, Otis was a 16-year-old teenage boy who was a virgin and was considered to be a late bloomer when compared to his classmates but who also was extraordinary when it comes to giving advice to others! Now, while we are still unsure about his virginity because it may or may not exist anymore, we are sure that the Otis of season 2 is quite confident and knows exactly what he wants. This new personality change is what we are loving and can’t wait to see more of it!

When there is Otis, there has to be Maeve. These two characters cannot be imagined without mentioning the other. However, there are a number of new things about her character as well. In some of the interviews taken with the team of Sex Education, it was found that the show will have more strength and central female characters and that the story will enhance in that way. This can be seen clearly through Maeve’s character as she builds a different level of friendship with Aimee and also has an interaction with her mother who is one of the new characters introduced in season 2.

Towards the end of season 1, we started seeing Ola’s character in conversation with Otis. While season 1 ended with imagery of these two in mind, season 2 completely complements that idea and continues with it. Yes, Ola is back and this time it seems like their relationship is proceeding. However, we don’t know until when they would be able to survive together since Otis’s mother and Ola’s father are also together. This confusion which started in the first season has been ignited in the upcoming one!

Something is also happening with this character but it is more about his personal life and his family issues rather than his relationship status which is already very clear through the trailer. Jackson admits in front of Otis that Maeve left him because she is in love with Otis. This statement obviously holds a lot more important than can be seen through the trailer. How will it affect Otis’s relationship with Ola and will there ever be anything between Maeve and Otis are just some questions that Jackson’s character has raised!

The friendship of Otis and Eric even with a few barriers is worth talking about. Hence we are happy to tell you that Eric is also back and that too along with his ultimate friendship bond with Otis. Somethings are better when not changed and their friendship is one such thing. However, what eventually changed for Eric is his relationship status. While we are happy for him and his new boyfriend which is also one of the new characters introduced in season 2, we are also sad about how things are between Adam and Eric. It is complicated and it does seem bad but we do hope that towards the end, they could probably work it out!

Adam has been sent to the Military but we do see him both there and at the local store, so when does he come back and how will his character develop after all the confusions that were present in season 1 will be an interesting aspect of this series. While he was a bully almost throughout the first season, his relation with Eric had a different vibe from the very beginning, and now that Eric has a boyfriend, things have gotten even more complexed.

Otis’s mother is one of the favorite characters from this show, not just because of her degree and her profession as a sex therapist but also as the mother of this teenager that we all adore. However, her relation with Otis and how it will be affected because of Ola’s father is what we are curious about. Nevertheless, having her back in season 2 was a must!

Last but not least, seeing Aimee develop personally and owning herself is what we all absolutely support. In season one, when she realized that she doesn’t always have to “fake it” it was amazing and now that she is owning her friendship with Maeve instead of being with a bunch of people who don’t really respect or understand her is also something that is phenomenal. Hence this new Aimee that is coming back for season 2 will definitely steal many hearts by her charming attributes!