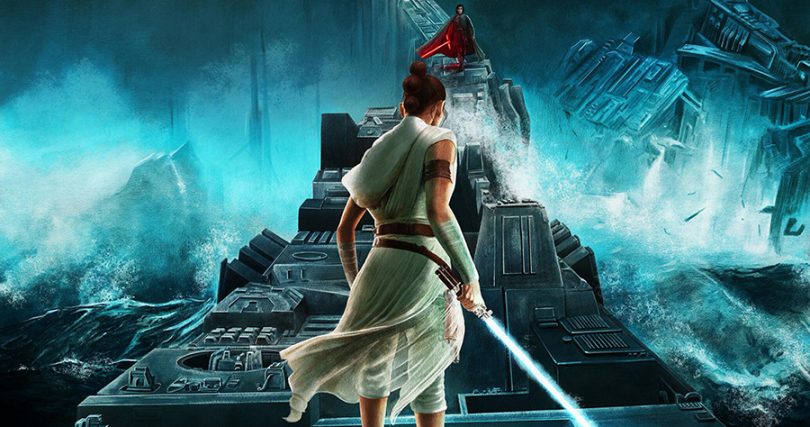 Finally, the last episode of the trilogy is out and as fans of the Star Wars Saga, it was our basic responsibility to go watch it in the theatre regardless of the bad reviews that we have been hearing. Well, I am sure you would feel the same that no matter what, at least the series deserve this much from our side. Hence, now that we have seen the movie, it is our responsibility to give an honest review of it while trying to be as unbiased as possible. I personally believe that giving a review for this specific episode is a bit difficult, the reason being the fact that there are so many things happening in the movie simultaneously that you it gets challenging to even have a proper flow, which could also be counted as one of the issues I personally had with this episode. Nevertheless, I will try to cover as many points as possible in order to give you an idea of what this movie is trying to do and what I felt about it. Be aware though, there will be spoilers ahead!

Okay so first things first, the movie starts off with the entry of Kylo Ren who is in a fight scene and is destroying everything and everyone in his sight, after which he meets up with Palpatine. Well, yes he is back and it is no secret since it was shown in the first scene only. It can be said that if the movie would have played more with the return of the empire instead of making it so straight forward and even the plan of Palpatine of killing “the girl” it would have been better. Like it doesn’t really make sense to bring him back in the first place but then if you are doing it and not even giving an explanation for it, at least do it properly? Just think about it, Palpatine is telling Rey’s secret to Kylo but what about his entry in the film again? Why would they not talk about it?

After introducing Palpatine, the film moves on and shows a scene of Poe, Finn, and Chewy which leads to the training scene of Rey by Leia, and Rey calling her master. This is also a piece of information that was thrown at the viewers just like that. No explanation of what happened and how it all happened is given. Although one thing that everyone would agree to is the inclusion of Leia’s character in the film. Since Carrie Fisher is no longer between us, including her character by adding unused past scenes was a big challenge and we respect it. The movie would have felt extremely out of place without her character.

One of the reasons why this film has gotten quite a number of bad reviews is because of the secrets that are not disclosed until the very end. As a viewer, you will wait for that scene to come in which they will finally reveal the big thing or at least give a background but it never happens.

One such scene would be the one in which Finn wanted to tell Rey something. He says that he wanted to tell her but they are in a difficult situation so he couldn’t. As soon as they get out of it, Rey asks him but since the place is crowded, he says that I will tell you about it. Later in the movie, when Poe Finn and Chewy face an encounter, and think that this might be there final time (obviously it’s not) Poe asks Finn what he was going to tell Rey, giving viewers a second round of hope that okay this secret will be revealed, or at least the fact that they remember it, but Finn denies to tell anything. I mean okay, we respect your privacy and that you didn’t want to tell Poe about it, but at least tell Rey? But I guess they just wanted to save this secret and so the film ends without it being mentioned anymore.

The Matter of Life and Death:

If you have seen the movie, you would know that everyone dies and comes back to life here. Well not everyone but enough of them for us to make this comment. I mean we are not against the concept but it should be done in a reasonable manner right?

So the first one to die is Chewy; technically he is not dead but his friends think of him as dead. The scene would have been more compelling if it had a twist but in the very next scene you get to know that he is alive and after a couple of scenes, his friends discover it as well. I mean we can even accept this but then there is no explanation as to how he got saved when Finn saw him, He does say that he might be on another carrier but at least confirm it, after all, Rey used all her power to protect him and then felt guilty as well for murdering him.

The second was C-3PO. We all saw it in the trailer when he said that I am taking a last look at my friends, and even in the film, it was such an emotional scene. However, later in the movie, R2 D2 saves the day by restoring 3PO’s memory in a click and that too at the right time so that 3PO can help his friends again.

Then came the death of Kylo Ren by Rey at that amazingly filmed scene. He had a vision of his mother dying and so dropped the lightsaber with which Rey killed him but then she also realized what just happened to Leia and so force healed Kylo and then left. Again, we are okay with the concept ad it was an emotional scene but then how Rey became this powerful? When did she learn all of it? Even if she did, at least tell us about it?

And then finally Ben Solo returns the favor by forcing healing Rey after she finishes the Emperor. Once she is healed from death and comes back to life, there comes the kiss scene which not most of us enjoyed as it was out of place. Another reason for not liking it is the fact that Ben dies immediately after that.

One of the most obvious things about this last episode was that it was trying its best to do damage control. As if the director wanted to satisfy all the fans. Since the past two films of this trilogy had two different setups, it was obviously extremely difficult to summarize both of them while giving a final call. Hence, in between all these struggles, it feels like the movie lost its way. Honestly, it would have been better to just announce the 10th episode and not have this last trilogy just for the sake of it! However, one can say that there is much more to star wars as this film was a plot for further exploration as well. I mean you reveal that Rey is a Palpatine by birth; this definitely needs to go somewhere!

All in all, we wouldn’t say that this was the best Star Wars movie or that it was a definite and appropriate end to the Saga but it was definitely not the worst of all as well. After all, it is difficult to end such a hyped-up series and nobody can ever satisfy everyone!