Home » Top 20 Fake Fights in the History of WWE 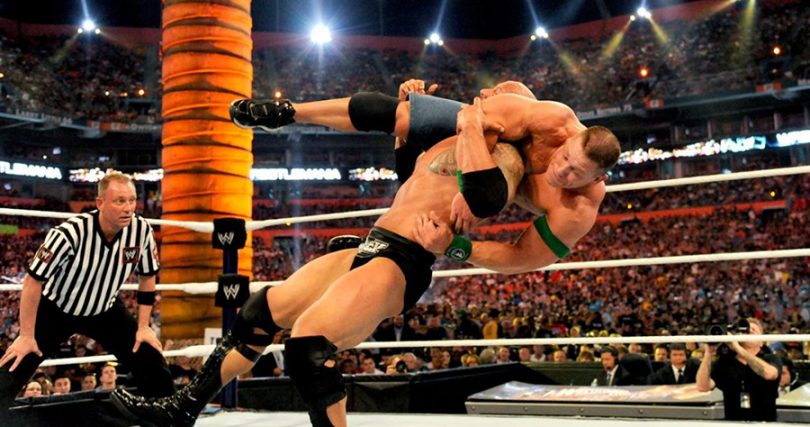 WWE has been one of the most enthusiastic sports that has more than millions of fans. Professional wrestling is what people have loved to watch since forever. Wrestling comes along with rumors, news, tactics, and stunts of the wrestlers that seem unbelievable on the screen. But do you think that every certain move and stunt is actually real in professional wrestling? Do you think that the wrestlers are actually beating the other one to death?

Well, we might want to break your heart here – because it isn’t real. By ‘it isn’t real’, we don’t mean that it’s fake – we mean to say, that it’s all scripted. Wrestling has been competitive and illusionistic for many years, which began with the idea of attracting the audience to watch the competitive fights of the wrestlers by believing that the competition is true, whereas it isn’t.

Every stunt, punch, and act are pre-planned. The physicality is real as the wrestlers are staged to perform their act. We are here with top 20 fake fights in the history of WWE. Some of these will amaze you but most of them are quite obvious to be ‘staged’. Let’s have a look at the following:

In a match of Royal Rumble 2018, where Undertaker and John Cena were up against each other in the ring – the match was pretty obvious to be a fake one. As the match began, Undertaker made his move by hitting John Cena on his head with his feet, well the move wasn’t smooth enough because it was quite obvious to the audience that the scene was totally scripted. Undertaker didn’t even touch John Cena as he made his kick and Cena went straight on the floor – WHAT IS THAT ABOUT?

Royal Rumble 2018 – the match that held between Shane McMahon and Sheamus was a super hit but there were moments that were obvious to be fake or planned. The moment when Shane McMahon jumped over Sheamus outside the ring, it was clearly enough seen that the leap from the ring was fake and both the wrestlers acted upon it.

As we know that WWE is scripted, it isn’t much fun to watch the wrestlers having a fake fight, is it? The match held among John Cena and Randy Orton was a complete disappointment. The fake punch that John Cena hit Randy Orton as he was laying on the floor of the ring, didn’t just make us admire his strength. He clearly punched on the floor and Randy Orton reacted terribly.

The Royal Rumble match that held between Daniel Bryan and Bray Wyatt was the fight that made us believe how fake WWE is. The hit that Daniel Bryan made against Bray was just terribly fake. He didn’t even hit Bray that hard.

As professional John Cena and Undertaker are, the fight that they had in Royal Rumble 2018 was something different. As Undertaker held up Cena to imply his finisher, it is quite obvious that he held his head between his legs so that he doesn’t hit the floor of the ring. The finisher was more like a stunt.

The slaps that Roman Reign hit Brock Lesnar were just so terribly fake, that it made the fans realize how scripted and planned WWE is. He didn’t even care to force his hand just so the audience could see that it’s actually happening. Secondly, the push that Roman gave to Lesnar was something that the audience didn’t cherish, he jumped high and just pushed Brock Lesnar back.

Watching Kane fighting against Rey Mysterio was quite a delight. The fake move that Kane made while implying his finisher on Rey, was obviously fake. He held his head among his legs and then crashed him on the floor so that Rey couldn’t get hurt. That’s sweet.

The memorable punch that Kevin Owens hit John Cena during a live match was so fake that it was quite noticeable by the audience. Instead of hitting John Cena in the face, he punched in the air to create a fictional move. This was obvious on the camera; you can check it out in the link given below.

During a ladder match in WWE, Sheamus was beaten quite good by Roman. But when Roman jumped from the ladder to make his iconic move on Sheamus, that seemed to be quite fake and planned. He landed on his hands but portrayed to hit Sheamus.

At the RAW match, we saw Triple H and Undertaker standing against each other in the ring. The way Triple H pushed Undertaker on the table and he was shown bleeding really bad – to be honest, the push wasn’t that hard and the blood seemed quite fake.

The fight that made the audience go crazy, was definitely the one in which Brock Lesnar and Big Show were up in the ring against each other. The punch on the head that Big Show hit Brock Lesnar with was totally a fake one. He didn’t even hit his head.

Wrestling is a sport which is meant to enthuse the fans and excite them with the competition between the wrestlers. As brutal and challenging these matches in the ring look, they aren’t as much harsh. The fictional scenario tends to lead the audience to think of it as real, whereas everything is planned and scripted. As a fan of WWE, we believe that the above mentioned 20 fake fights would’ve enthused many of you and maybe have broken hearts of several as well. Well, this is what this sport is all about!